In May 2010, the USDA OIG office released a study entitled the Animal and Plant Health Inspection Service Animal Care Program Inspections of Problematic Dealers . The paper looks suspiciously like a HSUS "research document" and no doubt this paper was a result of their lobbying efforts and their "APHIS insiders."

APHIS responded to the OIG study and began a series of steps to ramp up their inspection and enforcement actions against dog and horse breeders. See the APHIS Enhanced Animal Welfare Ace Enforcement Plan  and this pdf document.
For the past 2 years, APHIS has more than doubled the number of animal care investigations. As of the spring of 2011, APHIS had over 200 open AWA investigations involving dog dealers alone. The federal agency even increased their average monetary stipulation (fine) from $3,713 to $10,178 by May 2011.

Who would have ever thought that breeding dogs could be a federal crime?

According to an online APHIS manual regarding the Animal Welfare Act:

Pet Wholesalers: Anyone importing, buying, selling, or trading pets in wholesale channels must be licensed. Annual license fees are based on the amount received from the sale of regulated animals less the amount paid for these animals.

Pet Breeders: Anyone breeding pets for the wholesale trade must be licensed. You also may have to be licensed if you sell dogs as breeding stock to other breeders. Some small-scale breeders can qualify for an exemption (see "Hobby Breeders"). Annual license fees are based on 50 percent of gross sales of regulated animals."

Look at this job announcement for a full time investigator with APHIS Investigative and Enforcement Services (IES) that opened in July for the Richmond, VA metro area. The position was a GS-1810-09/11 with a salary range of $48,408 - $76,138 a year not including benefits.  It pays to find crime.

While the private sector workforce shrinks due to unemployment and a crippled economy, federal government employment has risen and yet, our taxpayer dollars pay for these government jobs. Big government is crushing us into further poverty. U.S. citizens not only pay the salaries of government workers, but for their offices and all the equipment they use.  Then the feds generate more revenue by imposing fines levied by reams of  federal statutes, codes, rules, regulations and laws that are churned out daily.  It is a self perpetuating system.  Citizens pay for a big government that in turn, must enforce the laws that justify their existence.  No wonder our country is spiraling out of control and into deeper debt.

Legislation Mills
The federal tax code alone covers 17,000 pages and requires over 700 different forms. There are over 4,000 federal crimes, and many times that number of regulations that carry criminal penalties. The federal criminal code today spans some 1400 pages, and that’s just the “pocket edition.” The Federal Registry which records all of the regulations the federal government imposes on businesses (all of which carry the force of law), now exceeds 75,000 pages. The Office of Management and Budget estimates that merely complying with these regulations — that is, paying lawyers to keep educated on them, interpret them and implement them — costs U.S. business another $500 to $600 billion per year.

When analysts at the Congressional Research Service tried to count the number of separate offences on the books, they were forced to give up, exhausted. Rules concerning corporate governance or the environment are often impossible to understand, yet breaking them can land you in prison. And so our 99% of hardworking, overtaxed citizens must deal with a thing called over-criminalization. Google it.  You will discover some frightening things about our country.

The proposed 2012 federal budget will appropriate $837 million to APHIS. $29 million of that is earmarked for Animal Welfare. APHIS requested $6 million of our taxpayer dollars for increased investigations of "problematic dog breeders and dealers."

More disturbing than the cost of compliance, however, is the way federal officials can manipulate the confusing maze of federal laws, codes and regulations to fulfill political agendas.  Disfavored industries (like dog breeding and animal farming) can be punished and manipulated.  U.S. attorneys fail to enfoce the laws with any kind of consistency or in other words, laws are selectively enforced and that leads to abuse of the federal court system.

A HSUS Insider
As an example, we are witnessing firsthand what happens when HSUS helps place one of its own in a powerful position within a federal agency. I am sure that by now we have all read about Sarah Conant, Chief of the newly created Animal Health and Welfare Enforcement/Investigative and Enforcement Services, and the Dollarhite case. If not, here are some links to catch you up to speed.

While trying to find out more about Ms. Conant, Spidey ran across an interesting document called the Public Service Job Search and Resource Guide which was published by Conant's alma mater - the University of Virginia. Conant was in fact the president and founder of the Virginia Animal Law Society. Included in the Job Search and Resource document is a sample of the letter she wrote to Lisa Boan of the HSUS Human Resources Department.

Apparently the 2005 letter was successful because in no time at all, she became a law clerk for the HSUS Animal Protection Litigation Section. She would obtain her law degree the very next year. (VA Bar No. 72847) Apparently, she spent a few more years with HSUS learning all she could. She was hired by APHIS in the fall of 2010.  Not bad for a person out of law school for only five years.

As you look through the "List of Helpful Web Sites" section in the back of the Job Search and Research Guide, be sure to note some very interesting organizations like Action Without Borders which is run by Idealist.org. These are funded in part by the Sterns Family Fund which also funds several Tides Foundation groups.  Equal Justice Works (David Stern) and the National Lawyers Guild are included in these resources.  George Soros Open Society Institute is also listed.    Say What?!?!?!?!  This is indeed a complex and tangled web at the highest levels of our government.  Like it or not, they use their indue influence to shape public opinion and government policy.  That explains a great deal, doesn't it????

A New Plan for a New Day
The "New APHIS" opened a new Center for Animal Welfare in Kansas City, MO. To help carry out the APHIS enhanced welfare plan, a new committee of Animal Care Team Specialists was formed. This team consists of Dr. Nora Wineland, who will be the Director. Laurie Gage is the Big Cat and Marine Mammal Specialist. Gary Goldberg was appointed as the Primate Specialist. Vaughan Langman is the Biophysicist. Denise Sofranko is the team's Elephant Specialist.  We may investigate these people in the future.

Right now we will focus on Dr, Craig Mabray who is the new APHIS Kennel Specialist. He is a graduate of the Tufts University of Veterinary Medicine and had a veterinary practice for over 20 years that focused on small animals. He served on the NM Board of Veterinary Medicine for four years and was their investigator/inspector for 18 months. Before joining APHIS, he served as chief of the City of Albuquerque Animal Welfare Department's animal shelter. I know what you are thinking - was he involved with the HEART ordinance battle of 2006? Most likely. A Tufts graduate... a proponent of S/N? the positions he has held in NM and Albuquerque all add up to "yes" in my books.

Mabray sold his original practice to VCA Antech  in the mid 2000s and then became a corporate DVM at the VCA Wyoming Animal Hospital in Albuquerque. He (and his client's animals?) participated in a FDA drug test for Anipryl. (In June of 2010, VCA Antech, Inc. (Nasdaq:WOOF) bought out PET DRx Corporation (VETS) and merged their assets.)  It will be interesting to find out if VCA Antech has a contract with APHIS.

APHIS even has a new site where you can report suspected "puppy mills."  According to the website:


AWIC [AWIC is the acronym for Animal Welfare Information Center] often receives reports of suspected animal cruelty or neglect. In most cases involving domestic animals or livestock, these reports should be made to a state or local police department or animal control agency. This interactive map displays contact information for government agencies and private organizations that respond to animal cruelty reports. . . The data was compiled by AWIC summer students. The map is not complete. If you would like us to add information, send us the name of the agency, address, phone numbers, email, URL, and a short description. Also, please let us know if any information needs updating.

This can't be good.  Along with this website are a number of other animal rights groups that are actively involved in investigating various USDA licensed dog breeders.  They send freedom of information requests to the agency digging for information and even publish the names and license numbers of breeders on their websites.  They also write letters to APHIS IES and encourage them to inspect various kennels throughout the United States.

Forewarned is forearmed so keep fighting the good fight!

THLN Links to ALDF, PeTA, PCRM, SPCA and others

The Foundation for All Creatures c/o Robert Trimble 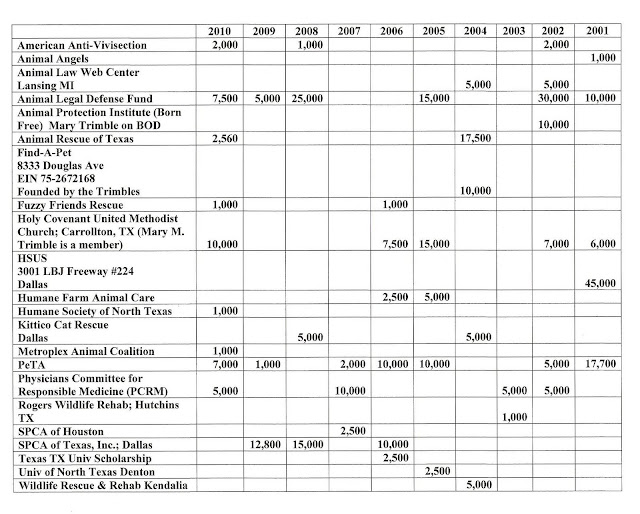 Remember that Robert L. "Skip" Trimble was once the treasurer for ALDF (Animal Legal Defense Fund) and for Born Free/API (Animal Protection Institute).  His wife, Mary Mitchell Trimble is still on the BOD of API.  As evidenced by these particular Trimble-related donations, the ALDF is still one of his pet projects.
Posted by PrairieGirl at 9:11 PM 0 comments